Websites and mobile applications need to be compatible with assistive technology to be deemed accessible and to comply with accessibility legislations such as the Americans with Disabilities Act (ADA).

In this guide, we unpack the various types of assistive technology to help you better understand its importance and how the disabled community relies on it.

What Is Assistive Technology?

Assistive technology is a term used to describe the equipment and software used by the disabled to make life more convenient. This includes performing everyday tasks such as learning, shopping, and accessing important information online.

While this type of technology most often refers to devices such as screen readers, magnifiers, and braille displays, it can also refer to wheelchairs and other mobility aids.

It’s essential for web designers and developers, as well as business owners, to understand how assistive technology relates to accessibility in order to provide a better user experience.

In this article, we will focus on the different forms of assistive technology as they relate to web accessibility and ADA compliance.

The Different Types of Assistive Technology

Let’s look at some of the most common assistive technology examples.

This is one of the most well-known forms of assistive technology. Screen readers are designed to output text on a screen to users who are visually impaired or blind. This output can be in one of two forms.

The first is text-to-speech output, which means the user will have the on-screen text read to them. The second is a braille display, which allows visually impaired users to read on-screen text using refreshable braille.

Screen readers are designed to understand almost any element that appears on a user’s screen, provided the website or application is created with accessibility in mind. An accessible site or application would include the correct heading structures, alternative text descriptions, as well as optimized forms.

Adaptive keyboards can be used by disabled people with different needs. For someone with motor impairments, an adaptive keyboard would have raised areas between keys, making it easier to find and press keys.

For users who have cognitive or learning disabilities and are unable to use a keyboard or mouse, there is voice recognition software.

To write emails and browse the web, people can speak aloud and have their speech converted to digital text.

Another assistive technology example is alternative input devices. These devices are designed to assist people with mobility impairments, making it possible to use a computer using their mouths, feet, a single finger, or even their breath.

While these devices are often activated with motion, they can also be set up to be activated by muscle signals, brain activity, or optical tracking. Examples of alternative input devices include:

This is a stick or stylus that’s mounted to a head device.

These are round, colorful buttons that can be customized to send a signal to a computer.

By inhaling and exhaling, a user can operate a computer.

Using eye movements, a user can navigate and type on a custom screen.

All of these devices often work in conjunction with on-screen keyboards or a pictogram interface.

Unfortunately, the only time these devices wouldn’t work on a particular website or application is when full keyboard access isn’t available, there are insufficient response time limits, or hover-only states are available.

People with visual, cognitive, and neurological disabilities can use reading assistants to change web content into a more usable format.

Designed to enhance communication, an AAC tool is designed for users who struggle with speech or who are non-verbal.

An ACC tool can include electronic systems as well as signs and gestures.

This form of assistive technology converts on-screen text into braille. A braille display is connected to a computer or smartphone via a USB or Bluetooth and includes a braille keyboard.

As the user moves down a screen, the braille display refreshes to include the current on-screen text.

This small device helps visually impaired and deaf users write and read text in braille with the help of synthesized speech and a braille display.

Many braille notetakers also include web browsing functionality, email, a calendar, a PDF reader, and a media player.

As the name suggests, this device is used to magnify text, making it easier for visually impaired people to read what’s on screen.

In some instances, electronic magnifiers have a built-in camera system, which displays a magnified image on a monitor. Users also have the option to adjust the color as well as the screen mode, ideal for anyone who is sensitive to glare.

An OCR picks out letters, numbers, and special characters, and turns them into printed documents. It can also be used to turn PDFs into word processor documents.

Converting printed text into a digital version makes it more comfortable for people with the lower vision to read.

The final entry on this list of assistive technology is text-to-speech software, which reads on-screen text aloud to users. This can include text on websites, emails, and documents, making the content more accessible to those with visual impairments and dyslexia.

Assistive technology is changing the way the disabled community uses the web while also ensuring businesses can do their part to create a more inclusive online experience for all.

We hope this guide has given you a more comprehensive look at the different types of assistive technology that are available today and what you should consider during the accessibility and compliance process. 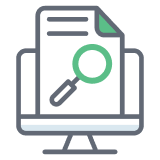